Video Embedded By – IPL.COM
Kolkata Knight Riders (KKR) returned to winning ways after beating Sunrisers Hyderabad (SRH) in a Super Over in Match 35 of the Dream11 Indian Premier League (IPL) 2020 at the Sheikh Zayed Stadium in Abu Dhabi on Sunday.
After both the teams were tied on the score of 163, the game headed for a Super Over. KKR bowled first in the Super Over and Lockie Ferguson, who had earlier picked three wickets, did a remarkable job to limit SRH to 2. The right-arm pacer picked David Warner’s wicket on the first ball and then disturbed the timber to dismiss Abdul Samad on the third delivery.
Rashid Khan was handed the responsibility to bowl in the Super Over for SRH. Rashid started with a dot ball before conceding a run on the second ball. While there was no run on the third delivery, KKR closed out the game with two leg-byes on the fourth ball.
SRH needed 18 runs in the final over to win the match and Andre Russell started the proceedings with a no ball. Warner hit three successive fours on the 2nd, 3rd and 4th deliveries and brought down the required target to 4 off 2 balls. 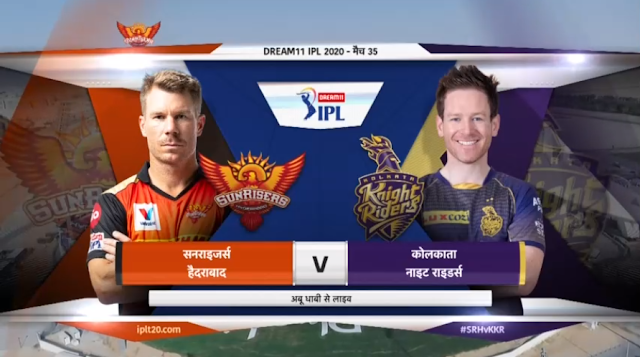 On the fifth ball, Warner scampered for a double, tapping one towards the long-on. However, Russell did not let SRH score two off the last ball and conceded just one to push the game into the Super Over.

Earlier, required to score 164 runs to win, SRH made a change to their opening duo as Kane Williamson came out to bat with Jonny Bairstow. The move worked well for SRH as the Williamson-Bairstow pair scored 57 in the powerplay.

The SRH opening pair hit four fours in the space of first three overs before adding three more in the fourth over. While Bairstow played his powerplay shots, Williamson used his much-celebrated deft touches to keep the scorecard ticking.

The duo completed a fifty-run stand in the sixth over which also saw Williamson’s well-timed six and four.

However, KKR broke the partnership as soon as Lockie Ferguson was introduced into the attack. The New Zealand speedster struck on his first delivery as Williamson, after playing an uppercut, was caught at third man.

In his next over, the right-arm pacer picked his second wicket as he dismissed Priyam Garg. KKR continued to chip away as Varun Chakravarthym in the ninth over, picked a big wicket of Bairstow.

While Ferguson had a change of ends, it did not stop his wicket-taking ways as he scalped his third wicket, getting Manish Pandey out with a perfect yorker.

Meanwhile, Warner, who came out to bat at number four, became the fourth player to bring up 5000 IPL runs.

The SRH skipper and Vijay Shankar took their side past 100, but Pat Cummins picked his first wicket as Vijay Shankar got out in the 16th over after mistiming his pull.

A lot was riding on skipper Warner and he and Abdul Samad added 37 runs together before Samad got out, courtesy a fine relay catch involving Ferguson and Gill, on the last ball of the 19th over.

SRH and KKR made two changes each to their playing XI. While Basil Thampi and Abdul Samad replaced Khaleel Ahmed and Shahbaz Nadeem in SRH’s playing XI, KKR brought Lockie Ferguson and Kuldeep Yadav into the mix, replacing Chris Green and Prasidh Krishna.

SRH had a chance to strike early and dismiss Shubman Gill in the second over. But, Rashid Khan dropped the catch and Gill, then batting on 1, got a life.

While SRH did not concede more than 15 in the first three overs, KKR openers shifted gears. Rahul Tripathi hit a six and a four off T Natarajan in the fourth over before Gill hit three successive fours in the fifth over bowled by Basil Thampi.

However, SRH managed to break the opening partnership on the final ball of the powerplay as T Natarajan disturbed the timber to get Tripathi out.

While Nitish Rana, who replaced Tripathi in the middle, and Gill added 39 runs together, with Rana doing the majority of the scoring, the two got out in the space of a run, courtesy two excellent catches from Priyam Garg.

The former India U19 captain took a fine diving catch at long off to get Gill out in the 12th over and in the next over, he completed a stunning catch, running in from the deep, to dismiss Rana for 39.

KKR brought up their hundred in the 15th over, but lost Andre Russell in the same over after the all-rounder was holed out at deep mid-wicket as T Natarajan picked his second wicket.

With five overs to go, KKR were 105/4 and needed a big flourish to end their innings on a high and their former and current skippers did just that, scoring 58 runs.

While SRH gave away 6 runs in the 16th over, Dinesh Karthik and Eoin Morgan hit a four each in the next over. With Karthik creaming a six over deep square, KKR scored 12 off the 18th over.

Karthik continued to score at a brisk pace as he added a four and a six to his tally and took KKR close to 150 at the end of the 19th over. The last over saw Morgan tonked a six and hit a four as KKR scored 16 to post 163 runs on the board.

While Karthik remained unbeaten on 29, Morgan, who got out on the last ball of the innings, scored 34.