Trent Boult starred with the ball while Ishan Kishan slammed an unbeaten 68 as Mumbai Indians (MI) beat Chennai Super Kings (CSK) by ten wickets in Match 41 of the Dream11 Indian Premier League (IPL) 2020 at the Sharjah Cricket Stadium on Friday.

Chasing 115, MI were off to a flying start as Ishan Kishan and Quinton de Kock scored 52 in the powerplay. The pair hit four fours in the first two overs before Ishan Kishan, took on Josh Hazlewood and Deepak Chahar, hitting four fours and a six across two overs to take MI close to fifty. 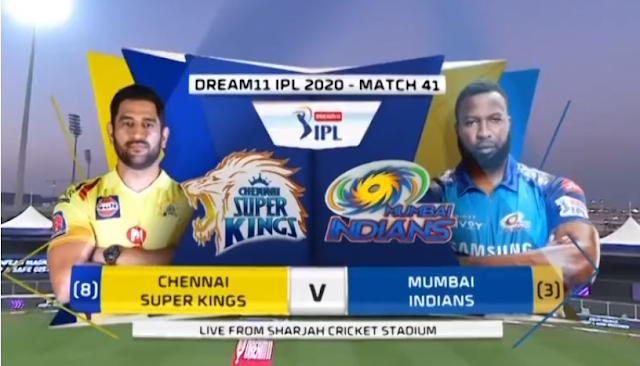 CSK introduced Shardul Thakur into the attack in the seventh over and de Kock went after him, creaming a four and a six.

In the ninth over, Kishan clubbed two sixes off Ravindra Jadeja to bring up his second fifty of the season and followed it up with one more six in the next over as MI moved to 98 after the end of 10 overs.

The Kishan-de Kock pair completed the 100-run partnership in the next over and a couple of overs later, went on to seal MI’s convincing 10-wicket win. While Kishan remained unbeaten on 68 from 37 balls, de Kock scored 46 not out.

Earlier, MI, who elected to bowl after Kieron Pollard won the toss, had to make a forced change as Saurabh Tiwary replaced injured Rohit Sharma in the middle. Meanwhile, CSK made three changes to their playing XI as N Jagadeesan, Ruturaj Gaikwad and Imran Tahir replaced Kedar Jadhav, Shane Watson and Piyush Chawla.

MI made a cracking start as Trent Boult and Jasprit Bumrah picked four wickets in the first three overs. Boult set the ball rolling for MI as he trapped Gaikwad before the wickets.

Bumrah then dismissed Ambati Rayudu and N Jagadeesan on successive deliveries in the second over. While the former edged one to Quinton de Kock, the latter was caught by Suryakumar Yadav in the first slip.

Boult picked his second wicket after Faf du Plessis nicked one to de Kock as CSK were reduced to 4/3 after 2.5 overs. The change of ends did not change Boult’s fortunes as he scalped Ravindra Jadeja’s wicket as MI picked five wickets in the powerplay.

CSK lost their sixth wicket as Rahul Chahar had MS Dhoni caught behind the wickets. The leg-spinner, in his next over, scalped his second wicket after Deepak Chahar was stumped.

Sam Curran and Shardul Thakur then added 28 runs together to push CSK past 70. However, Nathan Coulter-Nile broke the partnership after Thakur was caught as he went for a big shot.

Curran though continued to put up a fight as he, with Imran Tahir for company, dragged CSK past hundred. In the last over of the innings, Curran hit three fours and brought up a well-deserved half-century before getting out on the final ball as Boult disturbed the timber to pick his fourth wicket of the match. CSK eventually posted 114/9 on the board.