Mumbai Indians (MI) moved to the top of the points table after they beat Kolkata Knight Riders (KKR) by eight wickets in Match 32 of the Dream11 Indian Premier League (IPL) 2020 at the Sheikh Zayed Stadium in Abu Dhabi on Friday.

Needing 149 runs to win, MI made their intentions clear on the first ball of the chase as Rohit Sharma hit a four off debutant Chris Green. Cummins conceded nine from the second over before Rohit and de Kock hammered three fours in the next over to help MI move to 30/0.

de Kock added two more fours to his tally as he took on Cummins in the fourth over. While he had a life in the next over after Varun Chakravarthy could not hold on to a tough chance, running backwards from the short fine-leg, de Kock managed to hit two fours. The de Kock-Rohit pair completed the fifty-run stand in the final over of the powerplay. 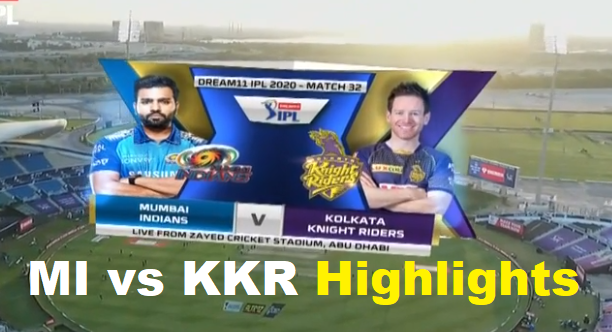 MI moved to 90 after Roht hit Chakravarthy for a six in the 10th over. However, the MI skipper got out in the next over after edging one to Karthik off Shivam Mavi. Three overs later, MI lost Suryakumar Yadav after the MI batsman dragged one back onto the stumps off Chakravarthy’s bowling.

Meanwhile, de Kock cranked a four and a six in the 15th over before Hardik Pandya hit two fours and a six off in the 16th over. MI closed out the game in the next over and sealed a win with 19 balls to spare and eight wickets in hand.

Earlier, KKR, under new skipper Eoin Morgan, won the toss and elected to bat. While KKR made two changes to their playing XI, bringing in Chris Green and Shivam in place of Tom Banton and Kamlesh Nagarkoti, MI made one change to their team as Nathan Coulter-Nile replaced James Pattinson.

KKR lost Rahul Tripathi in the third over after Suryakumar Yadav took a stunner at point to help Trent Boult pick his 50th IPL wicket. After KKR opener crunched a short ball, Surya did not have much time, but did a remarkable job to complete the catch.

MI struck for the second time in the powerplay as Coulter-Nile picked his first wicket for the Rohit Sharma-led unit, dismissing Nitish Rana with a short ball.

Rahul Chahar was introduced into the attack in the eighth over and he wasted no time to make an impact. The leg-spinner scalped two wickets in his first over. On the second ball of the over, he had Shubman Gill caught at long-on and then, on the next delivery, had Dinesh Karthik’s wicket after the batsman mistimed his sweep and saw the ball hit the stumps.

While Andre Russell and Morgan took KKR past fifty, MI brought Jasprit Bumrah back into the attack in the 11th over and the right-arm pacer did justice to the move as he did Russell in with a sharp bouncer. After the all-rounder could not control his shot, de Kock did the rest as KKR were reduced to 61/5.

KKR needed a partnership to stop the slide and skipper Morgan and Pat Cummins delivered.

Cummins took on his compatriot Coulter-Nile in the 13th over, hitting two fours and a six to push KKR past 80. While MI conceded 17 over the course of the next three overs, Morgan and Cummins hit a four each in the 17th over as KKR brought up their hundred.

Cummins, then got a life in the next over after de Kock could not hold on to a catching opportunity off Bumrah’s bowling.

The KKR duo scored 35 runs in the last two overs. Cummins added a four and a six to his account as he took on Boult in the penultimate over. In the 20th over, the Australian creamed a four through extra-cover to bring up his maiden IPL half-century. Morgan then tonked two sixes in the over as KKR posted 148/5 on the board, with Cummins and Morgan adding 87 off 56 deliveries.