Electing to bat, RR lost their top three – Steve Smith, Jos Buttler and Sanju Samson – in the power play. Isuru Udana struck in the third over as RR skipper chopped one onto the stumps.

While Buttler moved to 22 in no time, Navdeep Saini gave RCB their second wicket in the fourth over after Devdutt Padikkal held on to a stunning catch in the slips to cut short Buttler’s stay in the middle.

RR then lost Sanju Samson in the fifth over as Yuzvendra Chahal struck for the first time in the match.

Robin Uthappa and Mahipal Lomror, playing his first game of the season, then added 39 runs together before the former was holed out in the deep off Chahal’s bowling in the 11th over.
Riyan Parag then joined Lomror in the middle and the pair added 35 runs to push RR past 100. But the two got out in quick succession. While Udana got the wicket of Riyan Parag, Lomror’s 47-run knock came to an end after Chahal dismissed the left-hander in the 17th over.

Rahu Tewatia and Jofra Archer joined forces and the pair added 40 runs from the 20 deliveries to push RR past 150. While Tewatia remained unbeaten on 24 off 12 balls, Archer scored 16* from 10 balls. 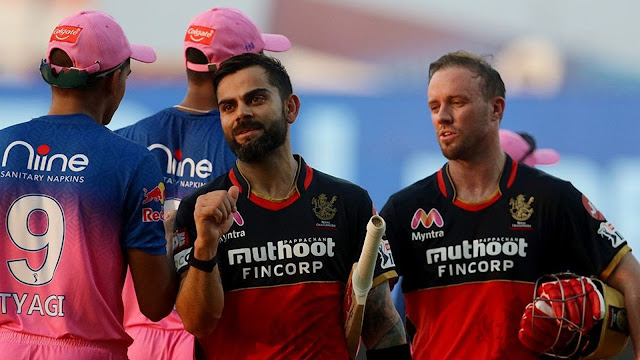 While Finch hit his second four of the match in the third over, Shreyas Gopal trapped Finch before the wickets to give RR their first breakthrough.

The left-hander, who was joined by RCB skipper Virat Kohli, continued his merry ways as RCB moved past fifty at the end of the powerplay. The Kohli-Padikkal pair kept the scorecard ticking and completed a half-century stand in the 10th over.

A couple of overs later, young Padikkal brought up his third fifty of the season as RCB surpassed the 90-run mark in the 12th over the chase.

In the next over, Kohli hit a four and a six off Riyan Parag to move into the 40s before raising his bat for his first fifty of the IPL 2020 as RCB moved closer to 120 at the end of the 15th over.

With 24 needed from the last three overs, RCB scored 16 off the 18th over bowled by Tom Curran, with Kohli hit three fours before completing 5500 IPL runs.

AB de Villiers then finished the things off with a four on the first ball of the last over as RCB sealed their third win from the four games.