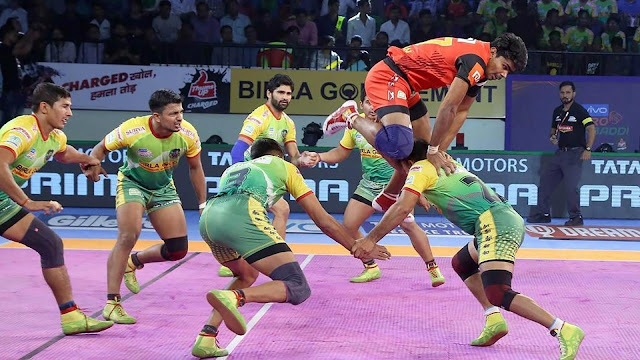 When a player initiates touch on the opposition with his hand it is called a hand touch. The raiders either touches a player or part of his jersey is also a hand touch.

In PKL Players who have been successful with this move in the competition are Ajay Thakur, Deepak Niwas Hooda, Naveen Kumar Goyat, Rohit Kumar, and Maninder Singh.

When a raider initiated and used foot or toe to get a touch it is called a toe touch.

In the PKL who have done well with the toe touch are Anup Kumar, Maninder Singh, Siddharth Sirish Desai, and Kashiling Adake.

#3 Dubki
When a raider dives his way under a chain of defenders just like a swimmer taking a dip underwater this move is called a Dubki.
Patna Pirates’ Pardeep Narwal is a famous exponent of this move. Some other raiders in the competition who have had success with this move are Naveen Kumar Goyat and former player and current Haryana Steelers coach Rakesh Kumar, and Pankaj Mohite.
#4 Scorpion Kick
When a raider kicks backward by bending one knee and snapping the other leg towards the opponent’s chest or face it’s called a scorpion kick.
Jasvir Singh popularized this move in the PKL by successfully executing it. Some other raiders who have been successful with the scorpion kick in the PKL are Jang Kun Lee, Rohit Kumar, and Meraj Sheykh.
#5 Frog Jump
In this move, the raiders jump almost 4-5 feet in the air over a defender like a frog.
Bengaluru Bulls’ Pawan Kumar Sehrawat, with his prowess in executing this move, has gained a lot of plaudits for his frog jumps in recent seasons of the PKL. Ajay Thakur, Kashiling Adke, and Rohit Kumar also possess a great frog jump and have deployed it successfully on a several occasions.