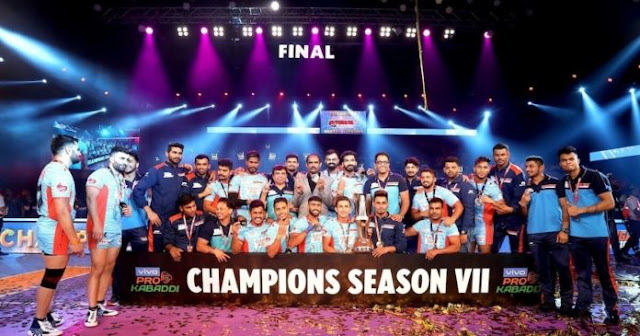 The Pro Kabaddi journey began in the year 2014 with much enthusiasm and anticipation. It featured eight teams battling it out for the coveted Pro Kabaddi champions’ title over a five-week period. Fans were all set for some mouth-watering ‘panga’ and the league did not fail to deliver. It had the second highest viewership among sporting events in India. In the end, Jaipur Pink Panthers emerged victorious beating U Mumba 35-24 in the final.

The second season kicked off in July 2015. This time, the squads were bigger with the strength going from 14 to 25 giving the world a glimpse of a whole lot of new and exciting kabaddi talent. U Mumba dominated the season and emerged as the deserving champions beating Bengaluru Bulls 36-30 in the finals.

With its popularity on the rise, Season 3 of Pro Kabaddi came just five months after the completion of the second season. The teams found their stride with the perfect balance of defensive and attacking players leading to more closely contested games. Patna Pirates ousted defending champions U Mumba in the finals and clinched a 31-28 victory.

In June 2016, Season 4 returned following closely on the heels of the previous edition of the league. This was the first time two consecutive seasons were played in the same calendar year. It also had increased international participation with 24 players from 12 countries joining the fray. Patna Pirates retained their title trumping inaugural season winners Jaipur Pink Panthers 37-29.

The sixth edition of vivo Pro Kabaddi saw a number of records tumbling. Five raiders went past the 200-raid point mark for the first time in league history, while three defenders scored over 80 tackle points with Nitesh Kumar becoming the first man to score 100 tackle points in a single season. In the end, it was Bengaluru Bulls who captured their maiden vivo Pro Kabaddi title, led by league MVP Pawan Kumar Sehrawat.

An even balance between raiders and defenders saw tough competition unfold in Season 7, with three raiders crossing the 300-raid point mark for the first time in a single season. While U Mumba made a record-equalling fifth playoffs appearance, table-toppers Dabang Delhi K.C. and Bengal Warriors, both, made their first final before the latter emerged as the winners and made Mohammad Esmaeil Nabibakhsh the first overseas captain to win the title.