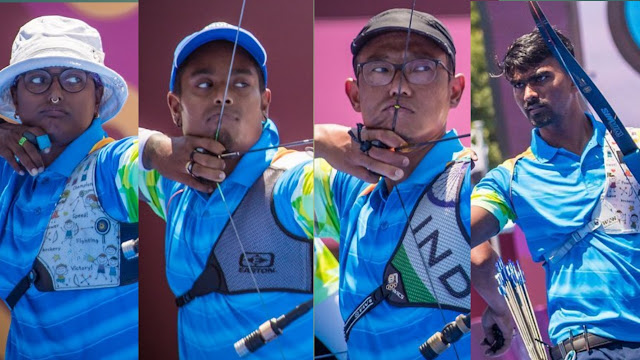 Olympics 2021 is finally underway. Indian archer Deepika Kumari was in action on Day 1. She competed in the women’s individual ranking round and finished 9th. In this round, the archers were required to shoot a total of 72 arrows across 12 rounds of 6 shots each. They were then ranked according to their scoring to decide the brackets for the elimination rounds.
Atanu as finishes at the 35th rank with 653 points, Pravin Jadhav finishes at the 31st rank with 656 points, and Tarundeep at 37th rank with 652 points.
The Indians finish the ranking round (72 arrows)
Men’s Individual Ranking Round
Pravin Jadhav: 656 (31st)
Atanu Das: 653 (35th)
Tarundeep Rai: 652 (37th)
Women’s Individual Ranking Round
Deepika Kumar: 663 (9th)
Team India
Indian team: 1961 (9th)
Mixed team: 1319 (9th)
Indian’s archery matches
Tarundeep Rai will meet Ukraine’s Oleksii Hunbin
Atanu Das will lock horns with Taipei’s Deng Yu-Cheng
Pravin Jadhav will be up against ROC’s Galsan Bazarzhapov
The Indian men’s team will play Kazakhstan in the first round and will run into Korea in the quarterfinal, if they manage to beat the Kazak archers.
In the mixed team, Deepika Kumari and Pravin Jadhav will meet Chinese Taipei’s Lin Chia-En and Tang Chih-Chun in the first round and will most probably run into Korea in the quarterfinals. Korea will meet Bangladesh in the first round.